Dr. Sheila Peters, a clinical psychologist and associate professor at Fisk University in Nashville, has been retained by the Monitor to conduct the focus groups. 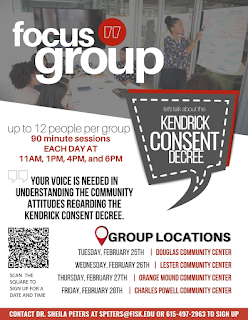 “The purpose of the focus groups is to provide a mechanism for the community to have a voice about the use of police surveillance in Memphis as well as the Kendrick decree,” Peters said. “The focus groups will give people a greater opportunity to express their personal perceptions and opinions.

“Participants will complete a short survey, a set of questions, and we will discuss that and other things that may come up,” Peters said.

Citizens may sign up for these by contacting Dr. Peters at 615-497-2963, or mailto:SPeters@Fisk.edu or by accessing the QR code on the Monitor’s website: https://www.memphispdmonitor.com/community-engagement

The Monitor also will hold its third public community forum at 7 p.m., March 10, at the Ben Hooks Library, 3030 Poplar Avenue.

U.S. District Judge Jon McCalla appointed Edward Stanton III on Dec. 21 to serve as Independent Monitor in the wake of the court’s Oct. 26 ruling that the city of Memphis had violated the 1978 Kendrick Consent Decree which forbade Memphis police from gathering political intelligence on citizens.

Other resources are available on the Monitor’s website, http://www.MemphisPDMonitor.com Our reports have mainly appeared in Daily Kos. Here is our most recent story, and other stories, videos and resources are linked afterwards:

Posted by Citizens Media Resource at 9:42 AM No comments:

The federal court-appointed Memphis Police Department Independent Monitor has objected to MPD’s proposed social media policy in a Jan. 8 letter to U.S. Western District Court Judge Jon McCalla.
MPD’s proposed policy, which was entered into the ACLU v. City of Memphis case record on Dec. 21, 2019, generally follows the FBI model and hierarchy of investigation and oversight. That represents a “slippery slope,” Independent Monitor Edward L. Stanton III told the court. The standards set by the Kendrick Consent Decree supersede the FBI’s model, Stanton wrote. Attorneys for the city of Memphis have the next move to make with the court, assuming they will argue that MPD’s newly crafted policy is adequate and conforms to the 1978 Decree and modern times.
Stanton wrote:
“Using the FBI’s protocols as a base for the City’s social-media policy would crest a slippery slope because the FBI is not bound by the Kendrick Consent Decree, and it was not so bound when it formulated its protocols. But the FBI’s demonstrated resistance to oversight and its spotty compliance with the comparatively minimal limits on its powers make the Bureau’s protocols a poor model for adoption by the City for a more fundamental reason.
“As the Court has now stated on several occasions, the Kendrick Consent Decree provides protections above the Constitutional floor. (See e.g., Order, ECF No. 250, at PagelD # 8405.) The FBI has proven itself unwilling or unable to comply with obligations below that floor. Its protocols should not now serve as guideposts for the City’s social media policy or other efforts by the City to remedy violations of its own, greater legal commitments.”
MODELING THE FBI
The FBI policy on investigations, including citizens’ social media activity, generally is a three-level process. The first level called “pre-assessment” requires no supervision of agents, no actual evidence or no probable cause. Escalating levels of investigation are termed “assessment” and “predicative investigation.”
In a Dec. 31, 2019, filing of comments, ACLU attorney Thomas Castelli had called the city’s proposed policy “confusing” and also cited flaws with an FBI “model.” Castelli wrote:
“Because the use of the ‘Bob Smith’ account was specifically found by this Court to violate the Consent Decree, ACLU-TN believes it is extremely important that the social media policy include specific discussion of and references to the use of covert or undercover social media accounts.”
McCalla found in October, 2018, that the city of Memphis had violated the 1978 Kendrick Consent Decree which forbade the gathering of political intelligence on citizens who were breaking no laws. At that time McCalla ordered the establishment of an Independent Monitor to review and guide MPD’s compliance with the Kendrick Decree.
City-retained attorney Mark Glover of the Baker Donelson law firm has petitioned the court to change the consent decree, claiming that it is outdated and will hamper law enforcement’s ability to combat crime. The city has even argued that the Kendrick Decree will cripple its Crimestoppers program. Judge McCalla has set a June 17, 2020, date for an evidentiary hearing on the city’s petition.
‘BOB SMITH’ AND THE BLACK LIST
The ACLU’s lawsuit was sparked by Memphis Mayor Jim Strickland’s so-called “black list” of citizens who must be escorted if they entered City Hall and was propelled by revelations that Sgt. Timothy Reynolds of MPD Homeland Security had posed as “Bob Smith” — self-described as a “fellow protester” — and had stalked social media accounts of “activists” and others. Reynolds became enthralled by his assignment and, among other compilations, made a power point report entitled “Blue Suede Shoes.” He made trips to Nashville to watch what he called a “Black Panther demonstration” and other actions and to study Metro Nashville PD responses to them. The city posted daily Joint Intelligence Briefings (JIBs) about citizens’ political activities and even disseminated those to large employers such as AutoZone, FedEx and St. Jude.
McCalla has relied on Monitor team member and social media Subject Matter Expert Rachel Levinson-Waldman to inform the court on social media investigation policies of other federal agencies, such as the FBI and IRS. Levinson-Waldman has testified and provided charts and documentation to the federal court during the Monitor’s quarterly reports in August and November, 2019.
A ‘CIVIL LIBERTIES LENS’
’“We are coming at this very much through a civil rights and civil liberties lens,” Levinson-Waldman told citizens at a Nov. 7, 2019, community forum.
“In my humble opinion, the tricky parts of the consent decree are going to be played out in the context of social media and online communications,” Deputy Monitor Jim Letten said at the November forum.
In McCalla’s Oct. 26, 2018, ruling, he noted that Memphis has the opportunity to be a “pioneer” and is in a unique position among U.S. law enforcement agencies to form policy “for the protection of privacy in the digital age.” McCalla wrote:

“Memphis is unique in having imposed a higher standard on itself by adopting the 1978 Consent Decree, but it is not alone in confronting the questions presented by modern surveillance. Every community must decide how to ensure an appropriate balance between public safety and protecting personal rights. That balance is determined not only by the text of the policies, but also by the actions taken to enforce them. By successful implementation of the Consent Decree, MPD has the opportunity to become one of the few, if only, metropolitan police departments in the country with a robust policy for the protection of privacy in the digital age. See generally Rachel Levinson-Waldman, Government Access to and Manipulation of Social Media: Legal and Policy Challenges, 61 How. L.J. 523 (2018) (detailing the widespread use of social media monitoring by police on lawful protesters).18 The Court recognizes this may be a heavy burden; being a pioneer usually is.”

Stanton’s letter to the court also references a 2014 report by the Privacy and Civil Liberties Oversight Board which has reported on FISA (Foreign Intelligence Surveillance Act) abuses by the FBI.
Thinking about FISA court — and complaints by the Memphis mayor and MPD that the 1978 Kendrick Decree is “out of date” — brings to mind former President George W. Bush complaining post-9/11 about the FISA law and the requirement of warrants for wiretaps.