Chipping Away at the First Amendment in Memphis, Tennessee

“No single encroachment upon liberty, considered alone, ever seems worthy of great effort to destroy. Ultimately, the established precedents justify the greater invasion, and the aggregate of these tyrannies become unbearable. Then comes the revolution…” 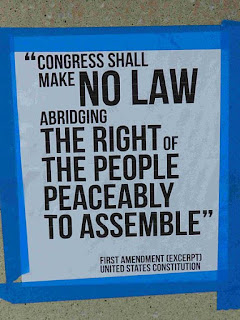 When the First Amendment is conquered and handed over to der Trump or such a future embodiment, it will not have happened with advance notice, parades in the street, or Blue Angels flyovers. It will be death by a thousand cuts.

This is what we are witnessing in America, especially since Sept. 11, 2001, and now primed for acceleration in the Trump era.

The City of Memphis is not exempt.

A recently proposed replacement of the current “Parades and Public Assembles” ordinance, Chapter 12-52, has drawn attention, partly because it has been pitched as less than what it is.

Link to existing ordinance which would be replaced:
https://library.municode.com/tn/memphis/codes/code_of_ordinances?nodeId=TIT12STSIPUPL_CH12-52PAPUAS

“This only applies to parades and races,” City Council member and ordinance sponsor Reid Hedgepeth told the City of Memphis Public Safety Committee on Tuesday when only committee members Worth Morgan, Hedgepeth and Mativius Jones were in attendance. The ordinance passed unanimously out of committee and will begin its three-reading trek through the larger City Council on Dec. 5.