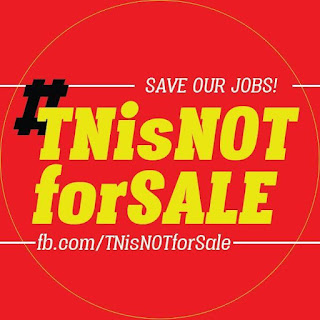 Treason is a federal crime, a betrayal of one's country.  But, any betrayal committed by a fiduciary of the state is a treasonous act, such as Gov. Haslam's secretive scheme, which smacks of self-dealing, to privatize state government.

Deadline is Dec. 20 to submit public comments to the state.  There are other ways to make one's opinions known, but this gets it on the record.  Here is a link to the state's site where you can submit your comments.

Here is a story in The Tennessean which shows how a Haslam campaign donor is helping whitewash the governor's scheme.

Another story, in Memphis Daily News.

Here is a story about Haslam's plan to demolish Fall Creek Falls inn and restaurant and privatize the park.


Sub-contracting Tennessee government functions to out-of-state corporations is no less than an act of treason and betrayal on the part of the governor.

Here are but a few problems:

1—Loss of quality control.  When our employees and administrative staff operate under the wing of the state, we have direct control over policy and practice.  When these positions and functions are subbed out, there is a disconnect that just cannot be bridged.  To get your own job done, have you ever had to depend on somebody in a department in another state?  Productivity declines.  Morale and sense of purpose will suffer, and with management splintered among distant corporations, accountability and oversight will be difficult.  Sub-contractors do not feel invested.

2—Myth of cost saving.  The percentage of state resources going to do the actual work will decline as corporate profits will become an added expense.  Either the sub-contracting will ultimately cost more, or outcomes will suffer.  We can’t have both.

3—Loss of tax revenue.  As most if not all these corporations are headquartered out of state, the profits will flow across Tennessee’s borders – in the wrong direction.  The payroll to Tennessee residents will decline.

4—Loss of quality of life.  This would be No. 1, if we were ranking.  As Tennessee workers get displaced and lose their jobs, families suffer in every way -- financially, emotionally, psychologically.   We understand some may get rehired, but the working conditions, management and benefits will not be as good as even with these state jobs, which already pay very low on average.

5—Loss of mission.  The mission and guiding star of a sub-contracting company will be CEO and executive compensation and bonuses, not the actual mission of the work that is required to keep Tennessee running.   Can these distant CEOs and COOs care about Tennessee families the way our neighbors can?  We are not in the same boat; we do not have the same needs and objectives.  What’s best for these corporations is not what’s best for Tennessee.

6--Loss of transparency in process.  The governor has forged ahead behind closed doors.  Why have we not had public or even legislative input in a media-covered forum?

Was there a bidding process?  Who stands to profit?  How do we get out of these contracts if/when things go badly?

Which career employees will be terminated?  What are their positions and names?

7—Corruption.  Does corruption or its appearance still matter?  Is the governor making these deals with persons and entities with which he has existing connections, and will he stand to gain directly or indirectly?

8—Abdication of fiduciary.  The governor took an oath to put Tennesseans first, and he violates his fiduciary duty by subbing out state jobs.   This is a scandal, even by today’s standards.

We have already seen the effects of sub-contracting in many areas, for example, with the prison system.  Let’s learn from our mistakes, not repeat them.

Posted by Citizens Media Resource at 10:33 AM No comments:

We give breaks to the multinational corporations and large financial institutions -- those who least need a helping hand -- while telling struggling Americans, You're on your own!

Noam Chomsky comments on the current state of democracy, the American Dream, income inequality and identifies the enemy.
Posted by Citizens Media Resource at 10:40 PM No comments:

One answer to the question, Who Will Watch the Watchers? is the Department of Justice.

But, did Memphis get in just under the wire on the U.S. Department of Justice’s review of the city’s policing practices?

Just 13 days before the Presidential election, the city and the DOJ’s division of Community Oriented Policing Services (COPS) announced a collaborative and voluntary review and reform of police practices in Memphis.

DOJ attorneys and career staff, especially in the Civil Rights division, are polishing their resumes in anticipation of a Trump administration that would neuter investigations into police abuses, hate crimes and more.

Meanwhile, the show must go on, and five COPS staffers from Washington and three contractors who are part of the review team were in Memphis this week during the "assessment" phase of their project. The DOJ folks seem serious and methodical, taking things in and being circumspect in comments other than to explain their plan and process.

A good sign is that they sought the locals' advice on where to eat and found their way to Memphis BBQ.  They were guarded in their comments about everything else, so we won't reveal too much here, except to say they reported BBQ was Central to their culinary experience, and it seemed BBQ was the One and Only thing they enjoyed most.

Forty-seven years ago today, a special unit of Chicago police carried out a pre-dawn raid against Black Panther members while they slept.  They executed leaders Fred Hampton and Mark Clark and
wounded several other Panthers.

In today's political environment, in which racists have been emboldened to "come out" and say black lives don't matter, do the FBI's and other official government acts of racism and cover-up from that era come echoing back? The FBI set out to destroy the Black Panthers, whose main objectives were feeding and educating kids.

This analysis from Flint Taylor, lawyer for Fred Hampton's family.

Posted by Citizens Media Resource at 6:25 PM No comments: