While Watching the Watchers, researching for several years and making a documentary, at some point we seemingly got ahead of the curve and pointed out some ways the police and the city could improve.  Of course, "local" people do not often get credit for knowing a thing or two -- especially if there's not a big consulting fee from an out-of-state corporation, which is how Memphis tends to roll.

In April, we asked Memphis police brass if they were paying attention to how the Department of Justice was coming down on cities the DOJ civil rights division had investigated.  The idea was for MPD to keep up with best practices and recommendations, not only to have a better police force and city but so the city could avoid the multi-million-dollar monitoring costs borne by cities such as New Orleans and Cleveland that had been subjected to DOJ consent decrees.

We got a fuzzy answer.  Yesterday, we got a better answer when the DOJ said they would undertake an assessment of MPD -- not an investigation as such -- at no cost to the city.

Back in July, one day after protestors shut down the Hernando DeSoto Bridge across the Mississippi River, Live at 9 on Memphis TV station WREG interviewed Who Will Watch the Watchers? producer Gary Moore.

It was some timing.  The divide between law enforcement and community and regular images of police killing unarmed men make up the hot topic of the day in America.  Who Will Watch the Watchers? is a documentary which examines the increasing ways we see police abuses, and it tracks the struggles of citizens in Memphis who were arrested by police for taking video of police officers.

While waiting to go on the air in July, in studio we watched a press conference that included Memphis Mayor Jim Strickland and interim (now full-time) police director Michael Rallings.  Strickland and Rallings said they needed an "action plan," but did not have one just yet.

The city's typical response to a situation seems to be paying a bunch of money to an out-of-state corporation.  Like, when they paid $40,000 to the International Chiefs of Police to help them hire a new police chief -- then the city settled on local interim chief Rallings, whom they already knew!   We wrote that the whole process was flawed, dead in the water pretty much, before it got off to a late start.

We interviewed nationally recognized police administrators such as Dr. Cedric Alexander, public safety director in DeKalb County, Georgia, and native Memphian Anne Kirkpatrick, a former FBI trainer and police chief in Washington.  Kirkpatrick was hired by Chicago Mayor Rahm Emanuel this year to take on the onerous task of changing police culture at CPD.  The city of Memphis further had expenses in bringing candidates to Memphis for interviews and tours, plus who-knows-what other costs, even after the decision had already been made to retain Rallings.

We told Live at 9's Mary Beth Conley and Alex Coleman that there was already an "action plan," and it was free and on the Internet:  The President's Task Force on 21st Century Policing.

Then yesterday, Oct. 26, the U.S. Department of Justice announced they would undertake a two-year assessment of the Memphis Police Department -- at no cost to the city -- in order to improve the police department.   During the press conference, police director Rallings for the first time publicly cited the President's Task Force as the proper blueprint for Memphis and PD's everywhere.

Not trying to go all, told-you-so three and a half months ago, but it usually takes someone from out of town -- I guess no one thinks anyone "local" knows anything -- to say the same thing we said for it to be accepted.

At least one clue they took:  Instead of blowing a lot of money on a nothing-burger, this checkup will be paid for by the federal agency.

Here is a link to the press conference.

Link to Who Will Watch the Watchers? YouTube channel.

Posted by Citizens Media Resource at 4:50 PM No comments:

When It's a Crime to Report Crimes

A government contractor has been arrested for doing approximately what Edward Snowden did, 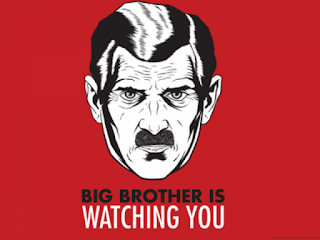 revealing wrongdoing by the National Security Agency (NSA).  We talk about this like it's a crime, "stealing" government secrets.  But, where is the crime here?  The government spying on private citizens and other wrongdoings seem like the real crimes and contain the real criminals.

Journalists expose themselves when they frame these as stories of people stealing government secrets, because if they report the information, they legally share in the "crime."

Is it criminal to report crimes?  Not usually.

Posted by Citizens Media Resource at 12:28 PM No comments:

Whatever threat -- veiled or overt -- the U.S. government laid on Yahoo to get it to spy on its email users, it worked, turning the Internet giant -- and who else that we don't know about yet? -- against people who trust and use its services.

This story from Op-Ed News highlights mass government spying and links to details about the Yahoo debacle.
Posted by Citizens Media Resource at 11:02 PM No comments:

Breakfast, si, Prison, no
As state legislatures have continued to put corporate profits and kickbacks ahead of people, and for-profit prisons have been built to warehouse children as well as adults, Just City in Memphis, TN, is rightly striving for reform and humanity. Children are the future, as they say, but Children are the Now as how we treat children today turns into our future.
After reading this Smart City story, I flashed back to when the chairman of the Williamson County (TN) Republican Party blasted the county for accepting federal money to serve (at no cost to the county) breakfast to poor and hungry kids. TV reporter Kara Kumari interviewed me for a counterpoint. Skipping over the screwed-up values and everything immoral that goes with the no-breakfast-for-hungry-and-poor-kids position, how about we cut to the cynical and tweak how the No-Breakfast Club thinks, anyway:


What it costs to feed and educate kids today costs vastly less than what it will cost to imprison them as adults.

www.JustCity.org
Posted by Citizens Media Resource at 9:54 AM No comments: