What Happened to the Bird Cage Liner?

"Which Tampon brand do you most use?"


Don't have a bird?  They used to call it fish wrapping, or it's used to stuff packing boxes.  Have you 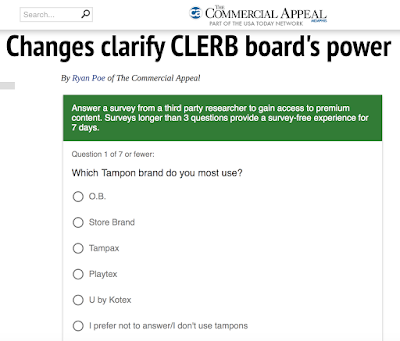 ever got a mail-order package and it had Chinese newsprint in it?

The demise of journalism, and especially print, is one of the two great threats to democracy in the 21st Century -- the other being unlimited, anonymous money to buy elected officials and thus public policy.

The Commercial Appeal's new corporate master, Gannett, is aggressively reshaping "content management" and "reader experiences," to cut out real people who write, photograph and edit the news we need to be an informed democracy.

Straddling the fence between building a solid pay wall between accessing content online are these odd little survey gatekeepers.  Like this one which asks, "Which Tampon brand do you most use?"

A reader who does not have a subscription must answer the survey before being allowed to view the story.  After so many views in a certain period of time, the user of a particular computer is blocked from content.  This is between requiring a paid subscription and having all content freely accessible.

Here is a link to a great segment from HBO's "Last Week Tonight with John Oliver" that spoofs and examines our current state of affairs.

Posted by Citizens Media Resource at 11:02 AM No comments:

Surprise, surprise!  After spending a $40,000 fee plus expenses to go through the charade of a flawed process, we searched far and wide and found the guy we already had.  Scroll to our story three posts down if you can stand to read background and analysis.  Here is link to the mayor's release on naming Rallings:

Link to City of Memphis release.
Posted by Citizens Media Resource at 5:21 PM No comments: