'There Is No American Left'

We are privatizing our public institutions into morally corrupt profit engines, while ramping up to imprison dissent, and any semblance of a liberal alternative is no more than a hopeless vision---the rich and powerful and political bosses are putting their foot down---on the necks of Americans who used to have a fair chance at dignity and a living wage.  While the Democrats are less extreme than the Republicans in this bull rush to the Far Right, they are equally guilty for their enabling lack of resistance.

Here's what we are talking about in this story from an Australian magazine:

'There Is No American Left'
Posted by Citizens Media Resource at 10:38 PM No comments: 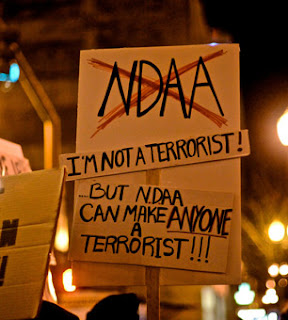 Speak No Evil....or Else     The National Defense Authorization Act
gives the government the leeway to imprison any of us for any amount of time in a secret military facility without any civil rights, including a trial or the light of day.  Sen. John McCain, heading a committee, just removed an amendment which would have blunted some of the government's authority to detain American citizens, which harks back to the days of World War II when the U.S. imprisoned 110,000 Japanese without due process.  This is the story of the next chapter in America's destruction of democracy and acceptance of fascism. Under the Department of Homeland Security, military police will be sent by  Corporate-Government Powers to control the angry masses of citizens who have been shoved out of a rigged system.   Click to Read about this from Chris Hedges.
http://truth-out.org/news/item/13524-chris-hedges-%7C-the-final-battle
Posted by Citizens Media Resource at 5:08 PM No comments:

The Wal-Mart Way: Bribing Their Way Around the World

The Foreign Corrupt Practices Act makes it illegal for U.S. corporations to bribe foreign officials to get the favors, the special treatment, the suppression of competition---whatever it wants---to give it a strategical edge.  Has that stopped Wal-Mart?

Wal-Mart's alleged bribes of officials in Brazil, China, Mexico and India have begun getting attention in the press.  This NYT investigative story exposes the anatomy of corruption as Wal-Mart was doing whatever it took to get its way at the expense of ancient pyramids and modern-day residents in a Mexican tourist town.  Click to read.

Posted by Citizens Media Resource at 10:05 PM No comments:

To go directly to the report:
http://tndp.org/blog/wp-content/uploads/2012/12/Middle-Class-Reports-Tennessee-FINAL.pdf


This report, the President's Plan to Extend the Middle-Class Tax Cuts Impact on Tennessee, from the National Economic Council, lays out what the President is proposing and gives scenarios for Tennessee families.


On another note, as much as I hate the dramatically termed "fiscal cliff," my accuracy button also is pushed when I hear it said that President Obama's proposal cuts taxes for 98 per cent, period. Even the President refers to it as the "middle-class tax cuts," since the majority of working Americans would be the most affected. For example, per the attached report, a working family of four in Tennessee making a median income of $63,700 would pay $2,200 more in taxes from a combination of the 10% bracket being eliminated and loss of the expanded child credit and marriage penalty relief.


While it is the case that those who have the least money are most likely to spend it out of necessity, thus most stimulating our consumer-driven economy, the truth is that the President's proposal is an "everybody" tax cut down to the first dollar of income---even for the wealthiest Americans---which makes it apply to 100% of taxpayers, not 98%. This is not to mention other changes which lie outside the income bracket portion and which variously could affect all income levels.

Read more »
Posted by Citizens Media Resource at 11:31 AM No comments:

This Is the Mother of All Screw Jobs, and Americans Don't Even Know About It

Here's a story that will make your blood boil...two of them, actually, must-reads to get a handle on this colossal rip-off and what it means.  The first story will warm you up, and the second story below explains how 'free trade' means freedom for the transnational corporations to monopolize, pollute, ignore rules, etc. at the expense of the people of all these countries, who are being cut down to a powerless slave class...Is the Obama administration about to sell us down the river?


Why So Secretive? The Trans-Pacific
Partnership as Global Coup

The Trans-Pacific Partnership is the most secretive and “least transparent” trade negotiations in history.  Click to read more at truth-out.org

The theoretical definition of a “free market” is one in which every individual actor in the realm of exchange exists in a state of equality of opportunity; where all compete with one another to produce the best products at the cheapest prices for consumers, thus the most innovative and efficient producers succeed while others fail, unregulated - and unhelped - by the state. Within “free markets,” what we call “free trade agreements” are meant to reduce barriers such as tariffs, subsidies and regulations so that market "competitors" can freely move products and goods across borders and compete in an ever-expanding global “free market."

The functional, or technical, definition of a “free market” is one in which the state regulates the market – the realm of economic exchange and activity – for the benefit of large transnational corporations and banks.

Posted by Citizens Media Resource at 3:11 PM No comments: