Cops Bust Journalist, Chase Another into the Bushes on MLK Day Media Shutout

Of all days to chase and arrest journalists and to block the media’s view with fire trucks.

Of all places to shut down civil disobedience on MLK Day.

Independent journalist Rachel Gay of Hive Swarm News & Media was covering an environmental protest when police arrested her and chased her associate Aaron Murphy about a third of a mile, across a railroad track and into some bushes where he hid with his equipment for about an hour until things cooled down. Police also arrested a citizen observer as he live-streamed on Facebook.

(More photos at Who Will Watch the Watchers? film website.)

Read more »
Posted by Citizens Media Resource at 2:25 PM No comments: Links to this post

Davis said Americans must resist Republican president-elect Trump with “hundreds” or “thousands” of times the force of any massive political action the country has seen before.

“If you think you’ve been to a lot of demonstrations in the past, well, multiply that by a hundred or a thousand over the next period,” said Davis, an author and academician who was targeted by the FBI and imprisoned in the 1970s as a Black Panther Party activist.  Davis, distinguished professor emerita at the University of California Santa Cruz, rallied activists at the Mid-South Peace and Justice Center’s 35th annual “Living the Legacy of Non-Violence Gala,” which honored Dr. King, who was assassinated while in Memphis to support sanitation workers in 1968.

Davis said Trump’s cabinet nominees are as if  “George Wallace came back from the grave.”

Read more »
Posted by Citizens Media Resource at 11:58 AM No comments: Links to this post

The "next era" in police oversight on the part of the Department of Justice will be....oops, there won't be one. 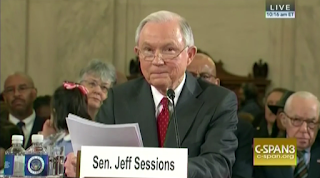 opponent of civil rights, equality, justice for all and criminal justice reform and transformation.

Which makes him the perfect Trump and Republican candidate.

Sessions was denied a federal judgeship in 1986 because of racist statements he made, and he appears to be opposite the type of leadership and integrity required by the role of the nation’s top lawyer.

We predicted after the presidential election that the DOJ’s Civil Rights Division and the COPS (Community Oriented Policing Services) Division would be gutted in a Trump presidency.  Sure enough, Sessions, in Senate confirmation hearings this week, gave notice that DOJ “patterns-and-practices” investigations into cities’ police departments would be a thing of the past.

Our prediction was not a tough call.

“Sessions struggled on day one of his confirmation hearing to reason past statements, and his record. In 1986, Sessions was denied a federal judgeship because he was deemed too racist.  Allegations at the time said that he called a black attorney 'boy,' and once suggested a white lawyer was a race traitor for working for black clients.”

In a Hail Mary of timing, the DOJ Civil Rights Division released a report touting its accomplishments since 1994 when federal legislation permitted the DOJ to investigate and dictate to local law enforcement agencies.

The Department of Justice COPS department in October announced it was initiating a “collaborative review” of the Memphis police department.  This is different from a patterns-and-practices investigation, which the DOJ Civil Rights Division has imposed upon cities.  The outcomes typically are consent decrees that the cities must enter to reform discriminatory and unconstitutional practices, and the cities must pay for about five years of monitoring  progress.  During the Obama administration, 23 cities were tabbed for these DOJ investigations. There were none during the Bush administration.

Sixteen cities, including Memphis, have been selected by the COPS office to join voluntary reviews, ostensibly to improve those departments.  Another motive on the part of cities to join these collaborative reviews was to head off a patterns-and-practices investigation by the DOJ’s Civil Rights Division.

It is likely they will be the last cities, period, at least during a Trump presidency.

While in Memphis a DOJ staffer told us, “We have no idea (what’s going to happen to us under Trump), but if somebody knows, I wish they would tell me.”

DOJ employees and attorneys, especially in the Civil Rights Division, are polishing up their resumes.  The COPS office, unfortunately, could be next down the line in the order of at least semi-extinction.


Posted by Citizens Media Resource at 8:01 PM No comments: Links to this post

Hope Is Not Dissent, Not Action in Fear State

Drumbeat of fear and intimidation causes those who crave freedom to wrap up in hope instead of joining en masse the few brave ones that manage to break out.


"The former front-line soldier, whose name is lost to history, suddenly disarmed and killed the two guards. He announced to his fellow prisoners that they were free.

"But the prisoners were overwhelmed with horror; no one followed his lead, and they all sat down right there and waited for a new convoy," Solzhenitsyn writes. The prisoner attempted in vain to shame them.

"And then he took up the rifles (thirty-two cartridges, 'thirty one for them!') and left alone. He killed and wounded several pursuers and with his thirty-second cartridge he shot himself.

The entire Archipelago might well have collapsed if all the former front-liners had behaved as he did."

The more despotic a regime becomes, the more it creates a climate of fear that transforms into terror. At the same time, it invests tremendous energy and resources in censorship and propaganda to maintain the fiction of the just and free state.

Chris Hedges spells out the larger picture which he does with his unique and special insights.  Link to his story:

"When Fear Comes"
Posted by Citizens Media Resource at 11:48 AM No comments: Links to this post

For all the good done by President Obama, all his qualities in eloquently stating our values and more, his administration from early on looked like one of missed opportunities.

William Rivers Pitt in truthout examines the pros and cons in specifics.   In a few paragraphs below, we spout off in general.

President Obama did not want to appear partisan -- and this reflex dogged him til the end when he hesitated to appoint a Supreme Court justice or federal judges while Congress was on an official break, and when he balked at busting Putin pre-election for espionage.

In a can't-win but nothing-to-lose political context, that was a curious and ironic reflex.

Read more »
Posted by Citizens Media Resource at 12:34 PM No comments: Links to this post

Revoking people's drivers licenses because they can't pay court costs or clerical fees is a form of debtor's prison that keeps people from earning money that could actually help them pay the court costs.

Just City, a criminal justice advocacy group in Memphis, spearheaded a class-action lawsuit to overturn Tennessee law that revokes drivers licenses, without notice, even in the case of minor fines and clerk fees.

This story in The Tennessean explains.

Posted by Citizens Media Resource at 11:54 AM No comments: Links to this post